Here is a June 7 2020 post over on IntellZine, our Intellectual Property-centric bog. The blog post was about Renewable Energy patents an how much they have expanded, especially solar IP.

Here is the Big winners of Renewable Energy: IP and Manufacturing article. 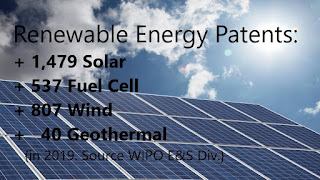 As you look at the companies that are winners in Renewable Energy (RE) you have distinct winners (and losers, especially in the fossil fuel world). But there are entire countries that stand to win as well. Several countries have become exporters of energy, for example, when they produce more regional energy than they can use. I like the image set related to 25 areas/countries that are winners in Renewable Energy (at LoveMoney.com, The world’s greenest nations that are reaping the rewards). Here’s Love/Money’s take on China, both in terms of the technology (Intellectual Property) and the manufacturing/exporting:
“Of all patents for renewable energy issued globally, as of 2016 China has 29%. That's more than 150,000 patents, which underlines the focus of China's investment in the industry. So it's not a shock that the country has been dubbed a “renewable energy superpower” in a recent report issued by the Global Commission on the Geopolitics of Energy Transformation. The report argued that, as renewables come to fossil fuels globally, new energy leaders will emerge.”
The US had only 100,000 patents (vs 150,000 for China) and Europe had 75,000 in renewables according to the Forbesanalysis in Jan 2019.  Overall, patents in renewables has made impressive progress, even though RE patents are only 1% of all patents (and other high-tech categories like computers are about 6%). Check out the great article at the World Intellectual Property Organization (WIPO) on RenewableEnergy patents by James Nurton. More than half of the RE patents through the Patent Cooperation Treaty (PCT) are in solar. Fuel Cell technology has consistently exceeded Wind in terms of patents. Fuel Cell (using hydrogen) is important because it can function as battery, battery backup, stationary power and portable power. Geothermal is trivial are of RE patent activity. When the RE “international” patents (PCTs) are registered at the national level the first three countries are: Japan, USA, and Germany.
On the manufacturing/exporting side, China has been a huge producer of the world’s renewables (solar, wind and more). Here’s how LoveMoneysummarized Chinese production of RE:
“China is currently the world’s largest exporter of solar panels, wind turbines, batteries and electric vehicles. The country is well-suited to wind power production, and it has an estimated potential capacity of 2,380 gigawatts. What’s more, many Chinese companies are investing in renewables.”
Keep in mind that many things sustainable are lower tech, not higher tech. Much, if not most of sustainable solutions does not require break-through solutions. Using less energy can be very low tech (turning the lights out when out). Driving less (by telework) can be no tech. But in the cases where leading tech can be a major competitive advantage, he owners of IP will win.
Look also at GlobalTrends in Renewable Energy Investment in 2019 by UN Environment Program and Bloomberg. Where is RE coming from? The investment from 2010 through 2019 has been $2.6T with 52% in Solar and $41% in Wind.
And the final question: how do we get to 100% renewable energy in a reasonably short period of time?
#RenewableEnergy #REPatents #IntellectualProperty #IntellZine #SustainZine #WIPO #Sustainability #PCT #REInvestment #Solar #Wind #RE100
Posted by BizMan at 1:48 PM