Population is a killer for Global Warming. Good news, Kinda.

The world's out of control human population growth is something that few people want to talk about loudly because it sounds so very insensitive. But the increase in world population at nearly exponential levels is non-sustainable and multiplies all issues of sustainability: exhausting natural resources, pollution, etc. Estimates are that world population will grow to between 9m and 11m by mid century and then slowly decline. 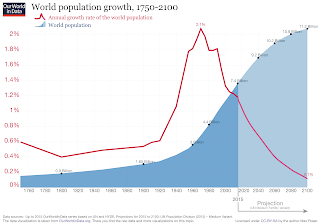 The problem with increased population is a double whammy. Not only are there more people, but the footprint of each person should raise dramatically as more people enter the middle class (or higher). Countries like China and India that have burned only 2 barrels of oil per person annually, can be expected to move up their consumption to 4 or 5 times that, more in line with the USA. People that eat lower on the food chain, rice and corn, can be expect to start eating beef and pork which takes 20 to 30 times the resources to produce.

But, a new study, published in the Lancet, has found that fertility rates since 1950 have dropped faster and further than anyone expected. (See the BBC article by James Gallagher on this study.)

The low fertility rates in developed countries means that their populations should start shrinking (without net immigration). In 1950 women had an average of 4.7 children in their lifetimes, a rate that is now half at 2.4! Fertility rates less than about 2.1 result in a decrease in population (excluding net immigration). Many of the developed countries, like the UK with 1.7, have less than 2. Japan has 1.3. With fewer young people to work, the aging retired population becomes a bigger and bigger burden on the economy. It will take decades for the change in fertility to work through the population levels.

Economic development has long looks at the use of population to improve the overall economy; more people could/should result in more things produces and a bigger economy. However, per capita economic development can be significantly improved by reducing the number of children. If the economy increases at 5%, but population also increases at 5%, then the per capita income remains the same. China reduced the rate of population growth, and that contributed dramatically to the improved per capita income and the rise of the middle class. I just saw stats talking about the percent of Chinese in extreme poverty at about 1950; more than 90% of the population lived in extreme poverty (currently a purchase-power-parity of $1.9 per day). By 2018, only about 1% of Chinese are in extreme poverty.  Controlling their population was a big contributor to China moving to surpass the USA in terms of economic power (GDP of more than $23T vs $19.5T for US). (Of course their single-child policies have caused many other problems and has recently been relaxed.)

So, a big sustainability question, is first to stop the increase in population world-wide and regionally. But should sustainability initiative actually champion the reduction of world population. One way or another we need to get back to the carrying capacity of Mother Earth.  When you look at Earth over-shoot day, which has moved to August 1, it becomes graphically clear how much we are depleting the earths resources to live beyond our means. Stated differently, about 212 days into the year, we exhausted the renewable resources provided by the earth (and sun), so the resources consumed in the remaining 153 days of the year are depleting resources. In 1987, overshoot day was December 19th; in 2000, overshoot day was November 1.

This is the same as your annual salary paying all your bills until August 1 (58% of the year), and then you have to borrow money to pay for the rest of the year. Each and every year, you have to borrow more because the overshoot day keeps moving earlier in the year. Non-sustainable issues like overshoot are cumulative, and compounding. Not only do you owe the cumulative total of all the borrowing, but the interest keeps growing at an expanding rate using the magic of compounding.

We need to get our overshoots (and deficits) under control, and start to make the magic of compounding work for us, not against. Getting countries (and world) population growth under control is probably the most important factor in sustainability, and ultimately, the health and wellness of our plant. It's pretty important, as well, for those things that have become accustomed to living on this planet.!
Posted by BizMan at 7:17 PM No comments:

By now you probably knew it was happening, but you probably didn't realize how much and how fast. If you figure subsidies, Solar and Wind are a slam-dunk powerful option.
Wind prices have been dropping fast and solar has been dripping like lead... Solar prices have dropped about 86% over the last 8 years.
Check out the latest 2018 report by Lazard. Note that they also analyze renewables with storage (batteries).
The Solar incentives make the solar option for most settings (especially in Sunny Florida) crazy profitable. For example, the investment of $100 for a rather serious system (much more than a home residence would need) would have a tax credit of 30%, plus 100% depreciation in the first year. So, if you had a 20% tax rate, your investment would look like this:
$100k Investment
-30k Tax Credit
-20k Depreciation
=50k Net investment. (Thant's only 50% of the original investment.)

Payback would be less than 8 years, maybe 5.
The power company has historically increased prices by 3% (or more in Florida)... Not a problem if you are producing your own power.

Return on investment would probably be 20% or greater after 20 years.
Solar in sunny places like Florida is a pretty good investment; but with the tax benefits solar is a crazy profitable investment. Plus you are saving lots of other resources including water and carbon dioxide.
We're working on a few calculators. Solar and Renewable Energy. This is a positive investment that keeps on giving.