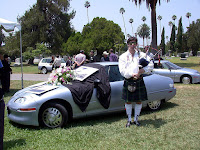 The statistics and the forecasts for Global Warming and Climate Change are increasingly dire. The decision – and it is a decision – to do business as usual (buy big gas guzzlers) is becoming increasingly costly to the world. And the window to avoid the worst warming scenarios is closing. The CO2 and methane that we have been pumping into the atmosphere will persist for decades (centuries really) continuing to heat a warming world.

On that note, a documentary is in order for Earth Day 2022, Who Killed the Electric Car (2006). Read about it on Wikipedia, watch on many venues including IMDb and Prime Video. It pretty much describes the methods of Big Tobacco in its hay day, and the methodology adopted by oil companies for about a century. Lots of celebrities. Hard to find a single factoid that is not true.

General Motors was starting to be very successful with its electric car in 2005, rolling it out to meet the aggressive zero emissions vehicle (ZEV) standards that California was phasing in at the time. The standard, appropriately call CARB, was suddenly watered down and phased out, with both the state of California (Schwarzenegger) and the Federal government (Bush) chasing after a shiny object: Hydrogen. Cool technology, but… Hydrogen is still not here, and will probably never be truly competitive for most applications.

GM (and the other Big Autos) killed off their EVs. In GMs case, the recalled them all back from their leases (not renewing) and crushed them all (but 1). If GM had stayed with their EV program they would have been in the same market position as Tesla is now, only 15 years earlier.  GM bought controlling position in a wonderful battery technology that would have given the EV 200+ mile range (vs 60 for the antiquated lead battery technology they were implementing). But that battery was never utilized. This controlling stake in the battery company was later sold to … Chevron!

The documentary investigates who were the murders of the EV and who were the accomplices. But the obvious victims are the general public and, of course, the environment! We continue to be addicted to oil. Ukraine is a stark reminder of what the power bought with oil revenues can do.

For now, drive less. Plan for a small vehicle. Make sure your next vehicle is either electric of plug-in- electric hybrid.

As we celebrate Earth Day of 2022, think about how easily the citizens can be manipulated away from objectives that are better for the world into paths that are only good for monopolies and the ruthless.

Please let us know if there is anything that is factually untrue. Also, are the conclusions sound?