There’s a BIG NatGas leak (Methane) in Florida. The source of which is not being owned up to. There’s no oil/gas drilling in the area. And, until about a year ago, most such leaks might go totally unnoticed. Read the Bloomberg article No One is Owning Up to Releasing Cloud of Methane in Florida.
First Methane. The largest component of natural gas (NatGas) is methane (EIA). Various oil formations of fossil fuels are oil, mostly gas, or a combination. Even in coal formations there is methane, which has made coal mining especially dangerous for explosions and fires.
When you see the flame stacks burning above oil wells and refineries, this is natural gas being flared off. Flaring is far preferred then just releasing it, venting, because methane is a wicked greenhouse gas (GHG) at 82 times the global warming capacity as CO2 in the first 20 years (about 30 times as potent over 100 years).
Estimates by industry experts are that as much methane is flared (and vented) as used in the USA. If the US consumes about 22% of the world’s natural gas (0.8 trillion cubic meters per year of 3.9Tm3 worldwide) then it flares/vents the same amount again. The US accounts for twice as much NatGas consumption as the entire EU (or Russia). Texas and North Dakota (Permian & Bakken) account for 10 to 20 times as much flaring as any other state (Se EIA 2019 report on flaring).
NatGas is Cleaner than... Because of an abundance of NatGas in the US, and it burns massively cleaner than coal in terms of pollutants (air and ash), the US has made a major shift to NatGas for power generation. NatGas has taken the place of coal in many power plants to represent 38.4% of the the US electrical power generation while the other categories are almost on parity with coal (23.5%), nuclear (19.7%) and renewables (17.9%).  NatGas was believed to have only half the greenhouse gas impact as coal as well. But, when all things are considered, this big advantage of NatGas has evaporated into thin air (vented and flared)!. And methane has soared to all time highs, even during the pandemic slowdown. More people, and more people eating higher on the food chain (cows) is a massive methane producer as well. Now the arctic heat wave(s) are starting to thaw permafrost where huge amounts of methane are sequestered. Ouch!
Here's a great visualization from NASA related to sources of methane and other greenhouse gasses.
Value of NatGas? You ask the wise questions, “Isn’t NatGas valuable? Why would any sane person or company, flare it into thin air?” First answer is, No. NatGas is not valuable unless you can transport it easily to where it could be processes (remove impurities) and consumed. For NatGas, a gas pipeline is pretty much the only option. Once NatGas reaches a refinery it can be processed into a liquid form (LNG) and even into gasoline or diesel.  Oil is easier to transport via oil tankers (truck or train or barge) or via pipelines. So, in the cases of wet gas, the oil (and other particulates) can be pumped and profitably sold if the gas can be flared away. In this case, NatGas is a byproduct of oil production. In many cases it cost more to try to distribute and process the NatGas then the market value once it reaches a distribution center and can be sold.
The government, Federal and/or State,  could and should regulate flaring. In Texas, the railroad authority regulates flaring, and they have never refused a flaring request, even when a pipeline is readily available. In Russia and Nigeria, 95% of all NatGas has to be recovered, not flared. But the influence (and corruption) in the extractive industries results in a free pass for friends and family, and only selective enforcement.
From space, you can now get beautiful nighttime pictures of flaring around the world. Check out Geology.com. Wow! But couldn’t a company can simply vent the methane and, although far worse in every way, it might go undetected? Actually, not so much any more. Newer satellite imagery can detect the methane in the atmosphere and methane plumes from natural (swamps) and unnatural sources. This brings us back to Florida. 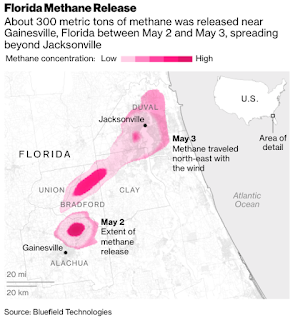 Bluefield Technologies Inc. analyzes data from the European Space Agency’s Sentinel-5P satellite. See image showing more than 300 metric tons of methane released near Gainesville and spreading through Jacksonville area.
There are only a couple possibly leak sources of such a massive amount of methane (or NatGas). No one has owned up to it. No one seems to be busy trying to find the source. This might be a common practice for pipelines or power plants? Even if there are no fines, it would be good to know. Don’t ya know?
#CleanEnergy #NatGas #Flaring #Fracking #Methane