It is the 50th Earth Day and the world is generally locked down while we deal with the Coronavirus pandemic -- and how best to ramp back up the world economy.
The pandemic is a serious and sobering aspect to the fun and excitement to an otherwise interesting and informative day of rallies, speeches waterway cleanups and more...

Worldwide we are going on 3M positive COVID19 cases and nearing 200,000 deaths. The US, never to be outdone in anything that seems competitive, has 32% of the cases and more than 25% of the deaths. Deaths in New York and New Jersey just passed 15,000 and 5,000 respectively. New England deaths exceed all other countries. It is hard to imagine this given that the virus had to cross the Pacific (to the west coast) or travel to Europe and then cross the pond to New England. The US has only 4.2% of the world's population, yet 25% of the worlds deaths, and rising. How can that be?

COVID has had a big toll on health and live and a wicked toll on the world's economies. There some linings, and some of them silver, from this pandemic – currently and on the other side of it. Let’s think of a couple while we address what the other side of COVID might look like. First, if you think that we will ever get back to “normal”, you probably haven’t thought it through a lot.

Pollution. The massive slowdown in the world economy has allowed the earth to take a breather. There are wonderful satellite views of China, Europe and the US, before and after pictures. Business as usual shows clouds of pollution followed by a few weeks of complete economic shutdown, and pristine-looking skies. Wow! There are similar pictures everywhere. Denver. LA, New York. The clear canals of Venice with fish and dolphin. 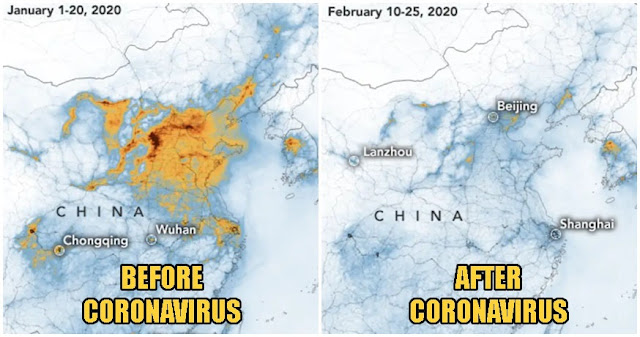 Pollution contributes to hundreds of millions of ailments every year, and to millions and millions of deaths. Let's say 6 to 10 million people die each year because of air pollution. (See for example, this Forbes article in 2018.) Note that the infographic shows about 2.1M in the USA. Maybe the slowdown in the first quarter of 2020 will result in 1M people saved related to air pollution?
Once people get a taste of clean air, they tend not to want to return to smog and pollution.
A Whole New Economy. The world economy will never be the same. For several reasons. First, what we came to think of as "normal" was never normal. We have undertaken to consume all the world's fossil fuels in a few short centuries. We are fully beginning to realize the full costs of non-sustainable systems, the business-as-usual economy was never normal.
Earth Overshoot day is a concept that is especially relevant to the first Earth Day in 1970. The resources we took and consumed from the earth -- although maybe not sustainable and renewable -- were fully supplied by the 1 planet we inhabit. That is, the 3.7B world population in 1970, staying with the same consumption patters, could live on the earth without depleting her resources. Think of this earth carrying capacity like you do a annual budget, it would be nice if the annual income lasted all year. But the population has more than doubled to 7.7B, and overall consumption has nearly doubled. Right now, the carrying capacity of Earth is exhausted about the end of July, only 57% of the way through the year! That's 43% deficit spending for the rest of the year. To consume 43% more than the earth's annual carrying capacity, we deplete resources like trees, fish and more.
But, in 2020, the earth has gotten a bit of a breather. Overshoot day will improve dramatically!
The economy will change. There will never be a "new normal". People have gotten a taste of teleworking. It's going to be hard to force people back into the offices that require an hour commute each way. Travel will take some time to come back, and business travel will never be the same. Stadium events will take some time to come back. Students have fully embraced online learning, and they will never fully go back.
Consumption of fossil fuels are down at least 30% during the closed economy, but consumption may only bounce back half when the economy slowly starts to churn back.
This might be the jump start that we all needed to step up a move toward sustainability. Assuming a 15% jump back, we would need to reduce our carbon footprint by 3% each and every year to have a 40% (overall) reduction by 2030, a 66% reduction by 2040, and near zero by 2050. Good news, we can easily move to 100% renewables by that time. (See Stanford Roadmap to 100% Renewable Energy by 2050 by country and also by major city.) And we can profitably move to 100% renewables if we include the health and death costs of fossil fuels.
Hind sight is 2020. Every year since the turn of century as been in the hottest 20 some years, with many years breaking all time records. In fact, many months have hit monthly record highs, especially since 2015 (an El Nino year). January 2020 was hottest on record, and the oceans have never been hotter. Remember that carbon dioxide (CO2) persists in the environment for about 100 years from the time we introduce it by burning fossil fuels. As CO2 zooms from about 320ppm a hundred years ago to 415ppm now, the green house gasses will result in atmospheric heating for a century!
Our linear economy was never "normal", for this reason, and many others no one should consider using the term "new normal" on the other side of the COVID recession. Hopefully, with 2020, we will have a new respect for science and scientists.
Let's leverage this tragedy of COVID to make a real difference in our trajectory of the future.
May every day be an Earth Day.