Great article. Like many such meetings, the major part of the the G20 meeting gets diverted to North Korea or Egypt or Syria. Too bad, there's a lot the the G20 can do, besides putter with the politics that's taken over the news today.

Surprisingly, there was movement on making progress on the very best places to push hard related to our impact on the environment, greenhouse gases (GHGs) and global warming.

Most people who don't focus on sustainability don't realize what a wicked impact hydro fluorocarbons (HFCs) have on the (atmosphere) environment. Most HFCs are released into the atmosphere from Freon, the gas that has an ugly impact on the Ozone layer in the atmosphere. But the other problem with florine-based gasses is that they last in the atmosphere for centuries, not decades. Look at the global warming potential of various gases here: GWP at INTCCC and wikipedia GHGs.

The approach to CFCs is one of the great success stories of our time. Starting with the Montreal Protocol in 1987 the international community has banded together to address and reduce CFCs. Most countries, that is. Progress has been especially strong because of the progress in alternative refrigerants that are still cheap and efficient. Not so much so, the progress in other greenhouse gases. 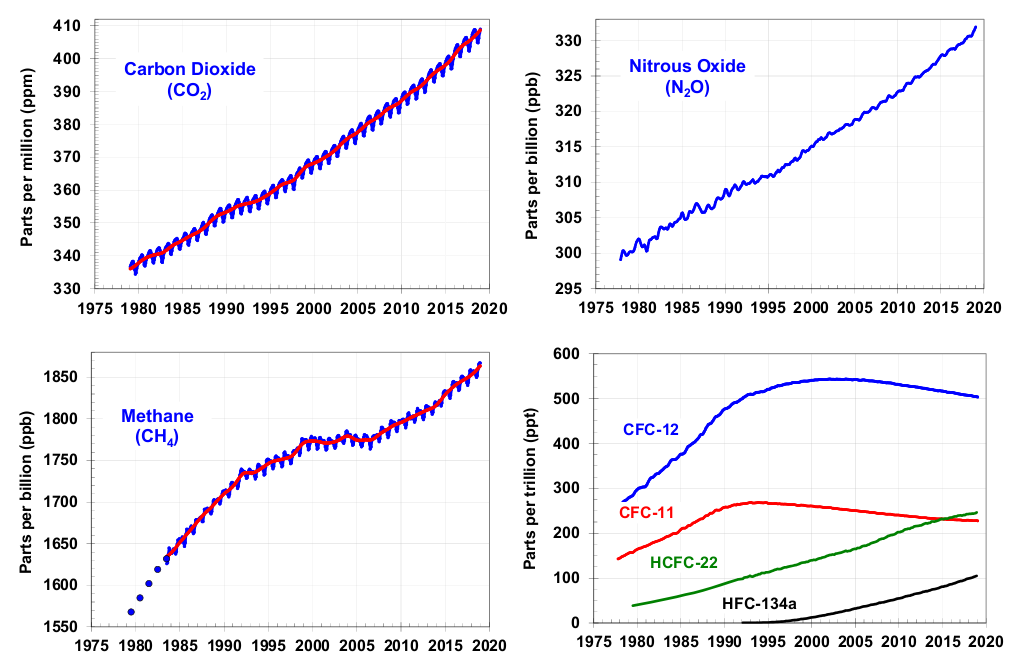 As you can see, the GHGs of carbon dioxide and the noxious oxides are increasing in the atmosphere unabated. Methane seems to be slowing down a little. Remember that these increased levels are above and beyond the levels that the atmosphere has become accustom to. Longer duration graphs are equally as telling.

But as you can see, CFC emissions have plateaued, but not necessarily reduced. The problem is that several countries, apparently, have not bothered to make the leap to replacement FREON  refrigerants, namely India and Brazil. One of the best, easiest, cheapest and greatest-impact methods to address GHG issues is to pressure those rogue countries to join the rest of the world on HFC reduction.

Turns out the G20 meeting, lead by China and USA, are looking to "encourage" these rogue countries to pick up the pace on HFCs.

Making progress on the most important things first, is a great approach to sustainability. HFCs is a great place to push. Even the G20, and the UN that don't agree on much, have taking this approach.

EE is probably the greatest place to focus, however. Energy efficiency (EE) and similar types of inefficiencies are the great untapped places to save money, energy and the environment. Everybody wins, except, maybe the power companies. But that's the focus of other books and blog posts.